skip to main | skip to sidebar

Confession #2: WE WILL ALWAYS BE HIS WHORES, or, Redeeming the Corgan 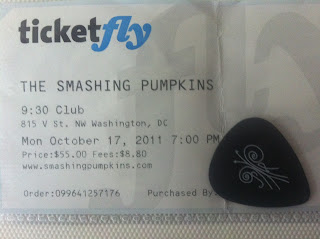 i was pulled into this dream by forces unknown and unseen. first, a sound like radio static, popping, crackling, hissing loudly in my head. a clear, neutral voice commanded me to let go of my fears and give in to the sensations. then i was falling backwards, through my bed, down a dark wormhole...like a mind control victim with "alice in wonderland" programming dissociating from the ungodly pain of an electroshock torture session delivered by the hands of the US government.

i arrived on the astral plane sitting indian-style next to e. on the floor of an unidentified dream-world venue. we were having a shared astral experience. i was lucid. i wasn't sure where we were or what was happening but somehow, i knew we had to head toward the stage, so we did. promptly, and almost unsurprisingly, an imposing and all-too-familiar figure emerged from the shadows, armed with his guitar. he pointed at us accusingly, making us both doubtlessly aware of just who was pulling the strings. 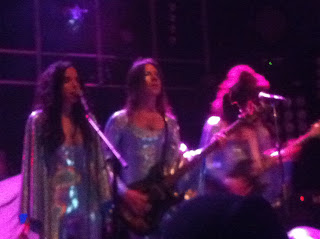 in a total 180 degree turn from the asheville debacle, the opening bands were enjoyable, especially fancy space people. another seemingly unrelated difference from asheville was the fact that i didn't need to take solace in doing drugs with a hobo to get myself through the night spiritually intact. 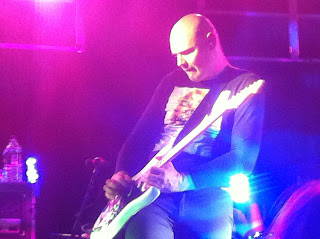 there was no viewing the show in secret shame/mock horror from the balcony as i had tentatively predicted. old habits and insane urges die hard, and somehow e. & me once again ended up being very close to the nasal singer with no hair/my beloved, my despair. 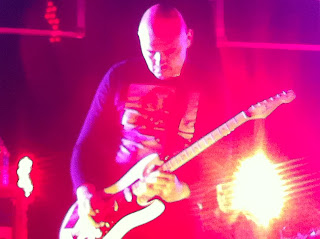 the dangerous curves of our favorite chemtrail aficionado were on full and prominent display in an outfit which left little to the [my] imagination. as i noticed billy's now-voluptuous ass straining against the confines of his skin-tight flood pants, i sent out a silent prayer. i knew i was exactly where god wanted me to be. 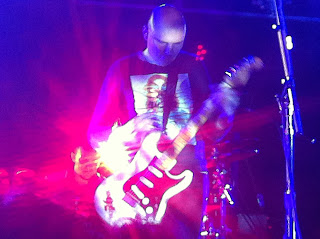 my own perversions aside, the show was everything that my (our) astral experiences had indicated it would be. it was amazing to the point of creating what roland vasco would refer to as a "time coup d'etat". in other words, the show was over 2 hours, but seemed much shorter. [canned laughter] 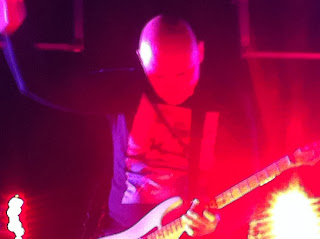 when it was all over, i became so overwhelmed that i found myself vomiting in a garbage-lined and presumably piss-soaked alleyway just feet away from the club. my knees and ankles (no offense) felt weak. the startling emotional imprint attack from which i had just suffered caused my near collapse, but that was to be expected. both myself and my comrade found the night to be a resounding success.

15+ years of idolatry...let's face it, i'm not going anywhere, and never could. the music has been a part of me for too long. but now, somehow, this band is bringing me the same kind of joy that it did so many years ago, a feeling which i had already accepted might never return to my black heart. 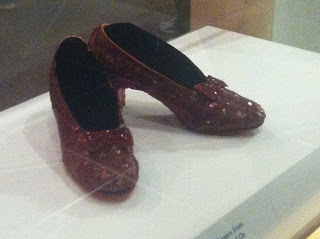 curiously (or tellingly), the day after the show, i felt triggered to go see dorothy's ruby red slippers...

should e. have brought this to my attention?

i know this is bleeding the corgan, but i love this. i love seeing mr b0lly being sincere and looking happy - and the fact that he is doing those things while expressing how amazing FREDDIE MERCURY was/is....well! i knew billy loves queen, but to hear him speak this way of freddie is so endearing. and billy is standing in front of what appear to be ceramic paisley cats****.

in a startling confession, i will divulge that both contributors to this word/thought/whim collection are actually feeling positive and excited about what lies in store for us in our next SP experience.

and not just 'cos of this video. 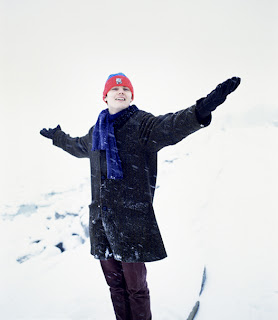 ****according to e., apparently i'm just seeing what i want to see, and those aren't cats, but pillows. they SHOULD be ceramic cats, but i'll just let this one slide. 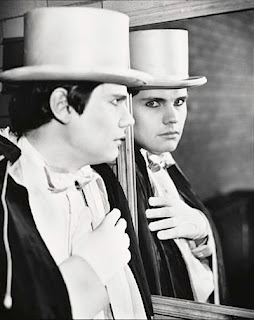 Despite a long period of denial, I've finally conceded to myself that after over 15 tumultuous years of unhealthy/unhinged entanglement, Billy Corgan still has my soul in a stranglehold - and it is never to be released.

I was startled how easy it was for others to trigger me into making the decision to go to this show - a decision which, judging by history, is likely to begin a domino-effect which will send me into an insane fucking downward spiral, virtually Rocketeering me toward my rock bottom.

As of now, I'm envisioning us watching the show from the balcony in horror as I channel Salieri secretly attending a performance of Don Giovanni in Amadeus. We'll see; we'll see.

Show in October...Confession to follow.
Posted by EXPERT OPINION at 11:10 AM 3 comments:

...the fuck is going on with BPC2 and the Illuminati? 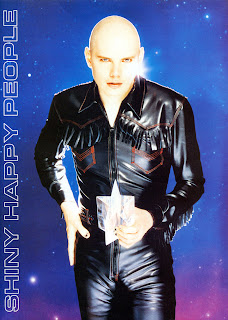 In a shocking development, putting aside our utter lack of interest in BPC2's new musical endeavours with his overtly self-indulgent "Queergarden by Retardoscope" project and general disugst with all things encompassing Billy Corgan himself, we have decided to temporarily resurrect Bleeding the Corgan.

Months ago, a bizarre Twitter exchange between Courtney Love and the EXPERT OPINION advisers piqued our interest about the bald rocker's possible involvement with Illuminist treachery, and we have decided to try to get to the bottom of this seemingly evil development.

Since then, Expert Opinion advisers at Bleeding the Corgan have been, despite being totally overwhelmed with all of the endless work it takes to even begin to scratch the surface of Brian May's evil over at WTYS and additionally being pretty much as disenchanted as it gets with BPC2 and all of his embarrassing antics, working on a shocking expose which seeks to answer questions such as "Why is he constantly surrounded by Monarch slaves (such as "dark duality twin" hack Aussie performer Jessica Veronica)?", and what's really going on with the aging nutcase's involvement in the unsavory "love + light" cult, the Source Family. We've already uncovered some shocking bombshells, so prepare yourselves.

Stay tuned for the full article, coming whenever the fuck we feel like getting around to it from the EXPERTS at Bleeding the Corgan.
Posted by EXPERT OPINION at 11:18 AM 3 comments:

Abandoned due to lack of interest 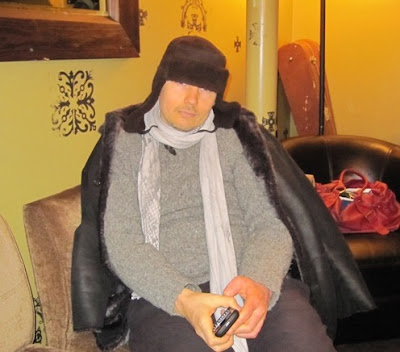 With deepest regrets, we have been forced to abandon this blog due to our severe lack of interest, and the amount of time and focus it takes to keep an eye on Brian May. We are sorry for any inconvenience this might cause, and wish you all the best of luck in your future Billy Corgan recovery.
Posted by EXPERT OPINION at 11:38 AM No comments:

"[CORGAN]'s really grasping at straws, trying to get into OK! Magazine and the tabloid circuit," a source told BLEEDINGTHECORGAN exclusively.

CORGAN offered anyone who looked at his Twitter on Tuesday a free t-shirt.

"What [CORGAN] doesn't know is that NOTHING could get the pop press to cover him. Even if he died, he wouldn't make the obituaries of any major publication --- they've chosen to snub him for the last decade and I don't think that's going to change because [BALDY]'s TWITTERING" 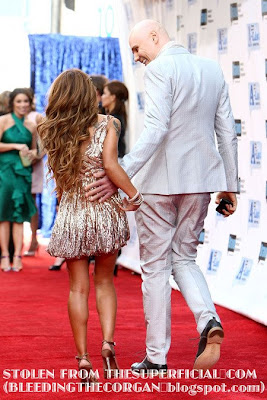 CITY OF BOSTON BLASTS CORGAN FOR LACK OF SEXINESS

"the snarl-toothed, lightbulb-headed corgan has always been one of rock music's uglier characters (which is quite an accomplishment - hats off). he's taken on a new sheen of unattractiveess now that he pouted through the roundly panned smashing pumpkins reuinion tour. don't quit your day job as lead jingle writer for the hyundai genesis."

in a shocking turn of events, someone at the boston phoenix actually thought BILLY CORGAN was relevant enough to include in a list of the 100 unsexiest men of the year 2009. bill arrived at no. 67 on the list, only a few slots above DICK CHENEY on the sex appeal scale.

well, i call bullshit and chalk it up to jealousy. what girl wouldn't want to hit this?: 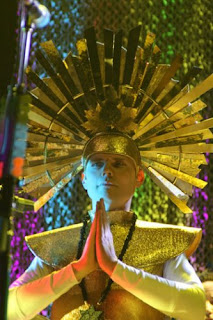 Posted by EXPERT OPINION at 5:43 PM No comments:

CONFESSION #1: The Great Pumpkin That Ruined My Life 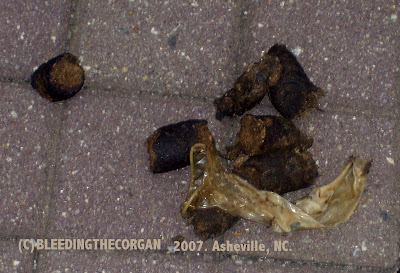 the names in these confessions have been changed.
when i saw this pile of (assumed) dog shit with a used condom on top, my first thought was that this was going to be a sign of things to come. this is one of the first things we encountered during our trip there for the residencies, and it pretty much sums up the entire experience: not only was there a vile piece of shit laying on the sidewalk, it was, to add insult to injury, topped with a used condom. whether it had been placed on top purposefully, or excreted out for whatever reason, will always remain a mystery. but the fact of it remained.
*************************
while sitting on the concrete outside the orange peel with x, there was an encounter with a hobo. he walked down into the cesspool of waiting pumpkins fans begging for crack money. his incoherant ranmbling was a welcome distraction from the retard showboating on his motorized skateboard. as the weathered crackhead approached, i turned to x, knowing that we would engage him.
"DO Y'ALL HAVE A COUPLA DOLLAS?!" the crackhead enquired.
"no dude, we gave it all to billy corgan. we're fucking broke cuz of him. he's inside right there, waiting to rip us off."
"WHAT?!", the hobo raged. "HE'S ROBBIN' YOU? And you came back here AGAIN to let him RAPE YOU and ROB YOU!? WHY DO YOU DO THAT TO YOURSELF! HE'S FUCKIN' RAPIN' YALL AND YOU DON'T EVEN GIVE A SHIT! WHO IS THIS YOU ALL IS TALKIN' ABOUT?"
"billy corgan."
"WELL YALL HAVE TO JUST GET OUT OF THAT SITUATION BECAUSE IT'S FUCKIN BULLSHIT HOW HE STOLE FROM YOU. AIN'T NO ONE GONNA STEAL SHIT FROM ME. AND YOU'RE GOING BACK FOR MORE."
the exchange grew louder, and i laughed as the fans surrounding us grew visibly agitated. i didn't give a shit, because that vagrant trying to score change for a crack rock made more sense than the imbecilic banter i heard coming from those dumb cocksuckers.
***************************
there was a brief moment in asheville when i decided that the only way to make things OK would be to find billy and destroy him myself. x and z felt the same way. a demonic static energy filled the room as we laid on our plastic mattresses over vinyl sheets. an evil was building between the three of us, and i had to get out. i left to go smoke in the front yard of the hostel. i realized i was chasing a ghost....one that would haunt me....FOREVER. i wanted blood.
*********************** 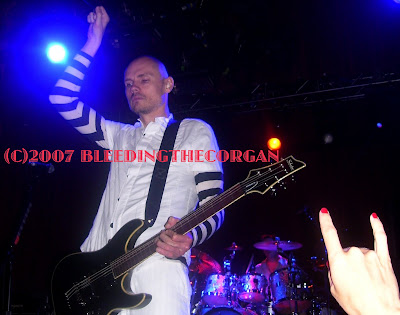 a fucking stupid pic from a mentally taxing show 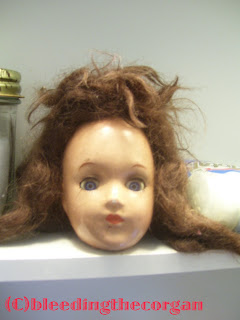 from the medicine cabinet of our bathroom at arthaus hostel